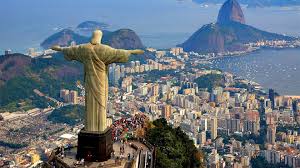 Just 10 months before the Olympic Games kick off, groups of young thieves have swept through the popular Ipanema and Copacabana beaches grabbing wallets and cell phones.

National television broadcast images of the incidents, setting off panic. In the videos, victims and police try to chase down suspects, scrambling over people packed onto the sand.

In one video, a policeman pulls out his gun in the middle of the beach after being pelted by balls of sand. In another, a British tourist sobs after robbers, she says, stole everything.

“It’s a cat and mouse thing,” said Michael Doyle, a flight attendant strolling along a stretch of beach where many of the robberies have taken place. “But there are so many people on the beach, it’s hard for the police to catch them.”

More than 20 people were detained on the beach on a recent, hot Saturday. According to police, many of the thieves are underage gangs who take buses from Rio’s poor neighborhoods in the north.

Self-proclaimed vigilantes have retaliated — in one incident stopping a bus near Copacabana Beach, smashing windows and pulling a suspected thief off, beating him.

Now, police have beefed up security on busy weekends. They’ve posted 700 officers along beaches and at 17 roadblocks, many on streets coming from the north.

They say they are looking for potential trouble-makers, such as teenagers who didn’t pay their bus fare. They also detain unaccompanied minors, handing them over to social services until parents or guardians come to claim them.

He says they’ll be ready for the Olympics but there are no guarantees there won’t be incidents.

“We are trying to prevent grab-and-run robberies,” he said as he inspected police operations at the end of Ipanema Beach. “But you can’t categorically deny they’ll happen.”

“This idea that you can stop any bus coming from the slums and divert them to a police station is criminalizing poverty,” he says.

Both he and Rio’s security chief agree that policing alone is not the solution.

Some 1.4 million people live in so-called favelas in Rio — about a fifth of the city’s population. For decades the precarious neighborhoods were controlled by drug gangs.

Since 2008, Rio has sent police and Army troops into dozens of favelas, especially those closest to the beaches and tourist areas. But many in the northern part of the city are still considered no-go zones for outsiders.

And even in the favelas that have been included in the “pacification” drive, residents complain about police violence and a complete lack of social infrastructure, such as schooling and job training to provide alternatives for young people.

There is concern crime could continue to grow as Brazil grapples with a prolonged recession and rising unemployment.